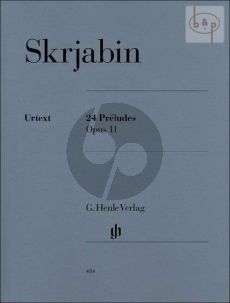 Alexander Scriabin occupies a special position among the Russian piano composers around the turn of the 19th to the 20th century. Already in his early works, he went beyond the Chopinesque traditions of his contemporaries Glazunov and Rachmaninoff. As he also did in his innumerable preludes, of which he brought together 24 in his op. 11, allowing for each major and minor key. However, in spite of keeping to the strict order of the circle of fifths, he took care to ensure that “each prelude is a small composition which can exist self-contained, independent of the other preludes”. By comparing the autograph and the first edition of 1897, this Henle Urtext edition has corrected a number of errors and inaccuracies. A grandiose work which should belong in the repertoire of every pianist!