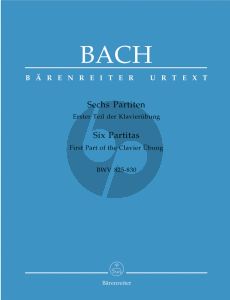 Johann Sebastian Bach’s ‘six partitas’ BWV 825–830 represent the pinnacle of his keyboard suites. In the search for the greatest variety of stylistic and compositional techniques, the collection shows itself to have the status of a ‘musical art book’. In keeping with this, Bach had these most prestigious works printed at his own expense as Part I of the ‘Clavier Übung ’.

This expanded new edition takes into consideration not only the revised main text of the ‘six partitas’ but also, for the first time evaluates printed copies known to have been used by Bach and his closest circle and copies made by his circle of pupils. These include annotations on ornamentation and valuable hints on performance practice which are invaluable for present-day musicians. This is the first extensive edition to take all existing sources into account. The editor is the British musicologist Richard Douglas Jones, well-known for his numerous discoveries and publications on Bach.

Bach’s Six Partitas are also published in an edition with fingerings by the renowned Bach interpreter Ragna Schirmer. - Urtext from the “New Bach Edition” - Extensive edition of Bach’s keyboard partitas with numerous facsimiles - Information on playing technique from Bach’s circle of pupils - Preface (Ger/Eng) on the composition of the work, performance practice and sources.