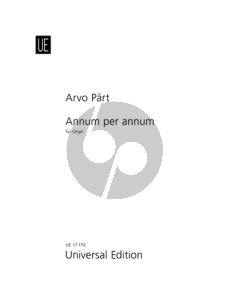 Pärt is one of the few composers to whom the term "new simplicity"- in itself absurd, and used both mistakenly and misleadingly - really applies. After a thorough study of medieval music, he arrived at a personal style which uses the minimum means to achieve a high degree of intensity. In view of the similarity to the structure of bell sounds, Pärt calls it "tintinnabuli style". By means of almost purely tonal structures - frequently broken triads and scales - Pärt creates an inner balance of form and harmony which can be understood in terms of his deep religious faith and inclination to mysticism. "Annum per annum" was commissioned in 1980 by the Südwestfunk in Baden-Baden for the 900th anniversary of the Cathedral in Speyer, and was played by the cathedral organist Leo Krämer on October 12 of that year. The piece consists of five sections (variations on a sequentially changing cantus firmus), an introduction and a coda. Each variation has one of the letters K- G- C- S- A, the initials of the five sections of the ordinary (Kyrie, Gloria, Credo, Sanctus, Agnus Dei). They symbolize the mass which "annum per annum" and day after day has been celebrated for nine centuries in the Cathedral at Speyer. (Thomas Daniel Schlee)