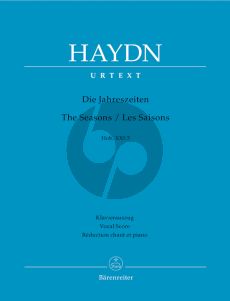 Joseph Haydn's oratorio The Seasons was composed directly after the first successful performances of The Creation. The Seasons has however been greatly overshadowed by The Creation for a long time and yet this work has far greater changes of style between popular Singspiel and great oratorio than The Creation. The Seasons continues to impress and remains part of the core repertoire to the present with its overwhelming richness of musical character and its immense formal variety. Scarcely another oratorio is able to so captivate an audience with such variety.