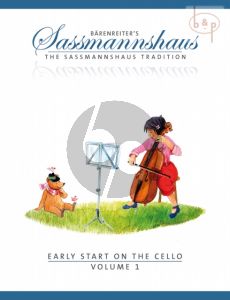 For more than three decades the 'Sassmannshaus Tradition' has been the household name for excellence in beginner string methods in German-speaking countries. More than half a million students have successfully learned to play string instruments using this publication. The publication of the four violin books in 2008 in a fully adapted English version has been a big success. On the back of this success story Bärenreiter has now published the four books for cello in a newly adapted version for today's English speaking children. What makes this cello method so unique? The leading German cello method now available in English. Large print notes and texts as well as many colourful illustrations are ideal for pre-school as well as school children. Note reading is emphasised from the first lesson, encouraging ensemble playing from the very beginning. Songs and scales in different positions are easily mastered within the first year of playing to ensure that children are not confined to first position playing. Advanced cello techniques such as varied bow strokes and shifting are introduced in a basic form.