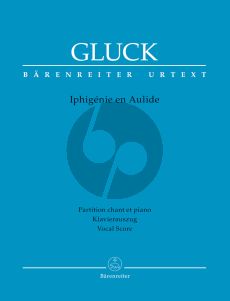 “Iphigénie en Aulide” is the first of six operas that Gluck composed for the Académie Royale de Musique. In keeping with his plans for operatic reform, he sought to create noble, expressive and natural melodies that did justice to every language and every national spirit while eliminating the “ridiculous distinction” between national styles of music. Although the première was coolly received at first by the contemporary press, “Iphigénie” developed into a tremendous success. The onrush of listeners was said to have been so great that the management of the Paris Opéra considered placing guards in front of the theatre.

Now Bärenreiter are issuing the carefully revised and corrected vocal score in a new engraving adapted to meet their current standards.

- Revised and newly engraved
- Detailed foreword (Ger/Fr/Eng) on the work’s genesis and reception history, together with a summary of the plot
- Practical, easy-to-play piano reduction