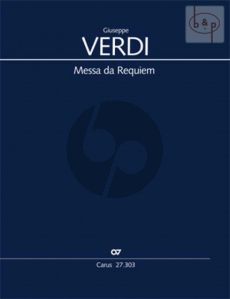 The first critical edition of Verdi's Requiem with complete performance material for sale. The edition is based on the autograph as the primary source and makes accessible one of the most important requiem settings of the 19th century in a modern scholarly edition. In particular, articulation, phrasing and dynamics are often indicated more precisely than in previous, well-known editions. By means of parallel passages, editorial additions attempt to make Verdi's intentions clearer through the judicious use of diacritical markings. A clearly organized disposition of the engraved music makes the full score and vocal score easy to read. Outstanding legibility of the parts. With an excellently playable vocal score by Paul Horn in tried and true quality. As a reasonably-priced alternative, a choral score is also available. With a foreword in three languages and a critical report. Among Verdi's many compositions, as a work of sacred music, the Requiem remains unique. It was composed as a musical memorial for the Italian national poet Alessandro Manzoni, deeply admired by Verdi, and was first performed on the first anniversary of his death on 22 May 1874 in Milan Cathedral. The exploration of many extremes places Verdi's tonal language wholly in the service of a dramatized liturgy. Scoring: Solo SMsTB, Coro SATB, Picc, 2 Fl, 2 Ob, 2 Clt, 4 Fg, 4 Cor, 4 Tr, 4 Ferntrompeten, 3 Trb, Oficleide, Timp, Perc, 2 Vl, Va, Vc, Cb Language: Latin Duration: 90 min.