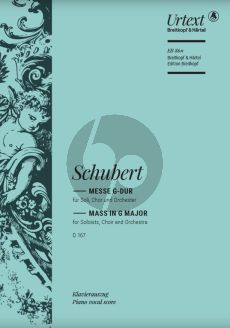 Up to now, Schubert's most popular 'early mass' has often been performed with strings alone. The wind parts added to the autograph by Ferdinand Schubert at a later date were considered inauthentic. Today, over a century later, the set of parts written by Franz Schubert himself has been rediscovered in Klosterneuburg. It contains parts for trumpet and timpani which are thus clearly authorized by the composer. There is also a figured organ part, which guarantees that the continuo can now be realized without misinterpretation. Revised New Edition 1995.