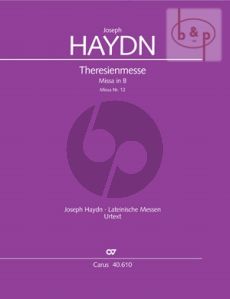 The Mass in B flat major by Joseph Haydn is known under the name 'Theresienmesse.' The reason for this epithet has to this day not been clarified, but it could have to do with a performance of another Mass in Vienna in May 1800, probably in the presence of the Empress Marie Therese. Compared with Haydn's last two masses and the large oratorios, the relatively modest orchestral scoring of the Theresienmesse is notable (for two clarinets, two trumpets with timpani, strings and organ continuo). Thus the Mass is also easily performable in those churches where music programs have only modest means at their disposal - and at the same they can have this treasure from the late Viennese classical period. Scoring: Soli SATB, Coro SATB, 2 Clt, 2 Ctr, Timp, 2 Vl, Va, Bc, [Fg] Language: Latin. Key: B flat major Duration: 40 min.