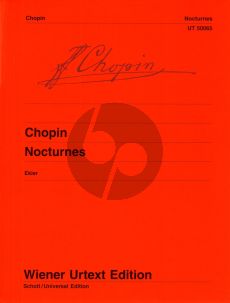 Chopin seems most romantic in his Nocturnes. Aside from the mazurkas, they belong to the group of works that are accessible also to the less experienced players. Both may explain the continuously high popularity of these richly nuanced miniatures. Like all Chopin publications by Wiener Urtext Edition that are edited by Jan Ekier (soloist, pedagogue and scholar), the present edition is thoroughly commented. In addition to critical notes and remarks on the interpretation, “authentic variants” – a general characteristic of Chopin – are given as footnotes to the musical text. Most of them are found in the famous E-flat major Nocturne (Op 9, No. 2), which appears twice in our edition: in the second version the variants are reproduced in their entirety. They point out the improvisational moment of Chopin's art in an impressive way.

The edition comprises the 18 Nocturnes of Opera 9, 15, 27, 32, 37, 48, 55 and 62, as well as three posthumous Opera: the very early Nocturne in E minor, the Nocturne in C minor (presumably from the Master's last year of life) and the 'Lento con gran espressione' (Nocturne in C sharp minor), in which Chopin quotes from other of his works.