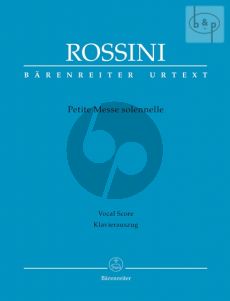 The 'Petite Messe solennelle' is the finest work of Rossini's late years. He composed it between 1863 and 1864 at the age of 71 as a commission for Countess Louise Pillet-Will for the consecration of her private chapel, where the work received its first performance in March 1864. Together with the 'Stabat mater', the mass is one of the composer's most important sacred works. The unusual instrumentation with two pianos and harmonium is entirely in keeping with the Neapolitan keyboard tradition of the 18th. century which was cultivated in France in Rossini's day. It forms a distinct contrast to the style of large-scale sacred compositions as written by, for example, Liszt and Bruckner. Rossini explained that he wrote the later orchestral version of the work dating from 1867 out of concern that if he did not do this, other composers might orchestrate the mass too heavily in later arrangements. The piano reduction by Andreas Köhs is extremely idiomatic and largely preserves the charming character of the unusual instrumentation. Based on the Urtext of the series 'Works of Gioachino Rossini' Foreword in two languages (Eng/Ger) With a separate harmonium part and one part for pianos I and II.