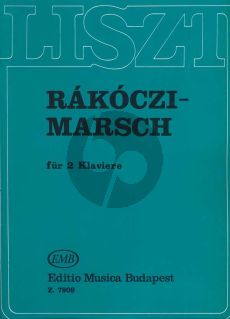 In the course of his long life Liszt wrote countless arrangements of the Rákóczi March, one of the most popular Hungarian melodies of his time. Among the piano versions for two hands the Fifteenth Hungarian Rhapsody is the most widely known which was published in 1853 by Schlesinger in Berlin (Raabe 106/15a, Grove 244/15a) and which could already draw on several, partly unpublished and partly published arrangements.

In 1865 a new symphonic orchestral version, longer and more complex than the previous ones, was first performed (R. 439, G. 117). Liszt himself considered this more significant than all his previous Rákóczi arrangements, which is also indicated by the fact that in 1871 he had another two-hand piano version, virtually as an extract of this, published by Schuberth in Leipzig (R. 106/15b, 244/15b), a facilitated two-hand piano arrangement, a four-hand version (R. 310, G 608) as well as an arrangement for two pianos.