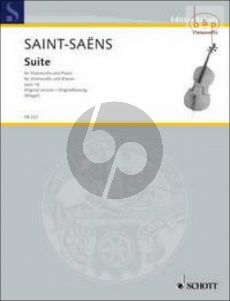 Apart from his 'classic', the First Concerto, Camille Saint-Saëns composed other works for the violoncello, such as his 'Suite' Op. 16. Written in 1862, the work lives on the composer's examination of tradition, especially of the form of the Baroque suite incorporated in a Romantic tonal language. This edition presents the original version of the work: for violoncello and piano. (The composer later arranged it and exchanged two movements, published as CB 229.) The five-movement suite begins with a prelude reminiscent of Bach which is followed by a pleasant serenade, a burlesque scherzo, and a sentimental romance, before it comes to an end with a virtuoso and rapturous finale. The tuneful and joyful-to-play 'Suite' is a valuable addition to the cello literature and suitable for tuition and concert alike.