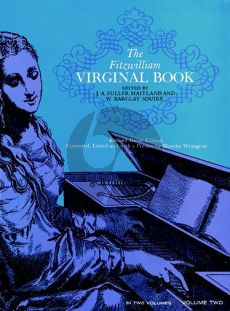 'The most remarkable, and in many respects the most valuable collection of Elizabethan keyboard music' (Grove's Dictionary of Music and Musicians). The close to 300 airs, variations, fantasies, toccatas, pavanes, galliards, allemandes and courantes in these two volumes include some of the finest examples of Elizabethan and Jacobean Music: Morley, Gibbons, Farnaby, Warrock, Ferdinando Richardson, Peter Phillips, Tomkins and practically every other composer of the virginalistic school. John Bull and William Byrd, two of England's greatest composers are represented by over 100 works.

For this extensively revised and corrected Dover edition, Blanche Winogron, noted musicologist and performer, undertook a thorough critical reexamination of the 1899 Maitland Squire edition by closely comparing it to a copy of the original manuscript (the original is in the Fitzwilliam Museum in Cambridge, England) from which it was transcribed. Numerous minor errors, misprints, and misinterpretations in the Maitland/Squire transcription have been corrected, resulting in a new edition closer to the original than ever before.

The period of this music was one of transition from the older principles and systems of notation to modern theories. This, then, is a most important document for musicologists and others interested in the history of music. But it is also a source of delight, allowing for countless hours at the keyboard for all lovers of good music.

The pieces herein, while composed for the virginal, can be played without difficulty on the piano or any other keyboard instrument. Maitland and Squire set the music into modern notation, preserving faithfully the intent of the composers.

Reprint of the Breitkopf & Härtel, 1899 edition.