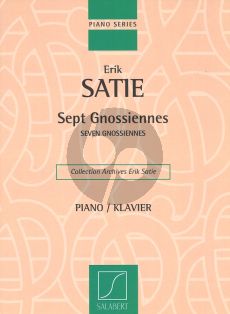 Just as the Trois Morceaux en forme de poire in fact comprise seven pieces, so Erik Satie´s Trois Gnossiennes come from a group of seven compositions. Inspired by a visit to the pavilion of exotic music at the 1889 Universal Exhibition, the ´gnossian mode´ charmed the composer to such an extent that he returned to it seven times in eight years, despite the fact that his music was otherwise characterized by perpetual renewal.
Following the six Gnossiennes already released, the 7th Gnosienne is published in this album for the first time.