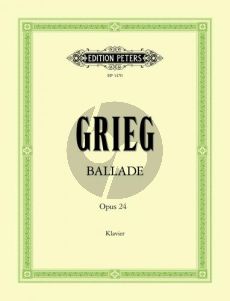 Although relatively unknown outside Norway, the Ballade, Op 24 is Grieg’s most significant large-scale solo piano work, exploring the complete resources of the piano. It is composed as a set of variations on the Norwegian folk song "Den Nordlanske Bondestand" (The Northland Peasantry). The range of expression contained in the 14 variations is absolutely astounding – they range from rather simple elaborations of the theme to deeply contrasting and daring excursions into widely differing characters and styles – there are canons, recitative-like passages, a sombre lento, light and witty scherzando variations as well as Lisztian, extremely forceful outbursts.

The Ballade apparently had a very special emotional meaning for Grieg. He said that it was written “with my life’s blood in days of sorrow and despair.” After his parents’ death in the autumn of 1875, Grieg was in a period of depression which was also caused by problems in his relationship with his wife Nina. In late July, 1876, Grieg played the work in a private performance for Dr. Max Abraham, director of the Peters publishing firm. According to witnesses, he put his entire soul into the interpretation – when he was finished, he was completely exhausted, and so agitated and shaken that he could not say a word for a long time afterwards. For the remainder of his life, Grieg would refuse to play the work in public.