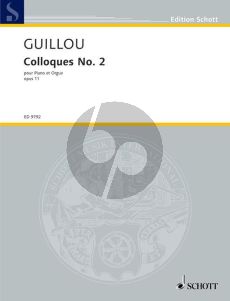 A musical instrument has its own personality, with a voice that can provoke reactions, give rise to dramatic impulses and awaken colours and moods; it is capable of articulating and responding to all life's questions and those of the spirit. When the composer had the idea of bringing together two instruments with the richest range of sounds in the Western musical world, he therefore imagined them answering one another in a passionate and eventfull colloquy, like two legendary mythological heroes.

They are indeed opposed in character, with contrasting voices that cannot match one another in timbre.Their personalities do not blend; they are opposed or superimposed in such a way that their respective frequencies and the release of their energy leads to the creation of a poem, as a story emerges and develops.

This Colloque No. 2 opens with a kind of sigh emitted by the piano and organ in unison: there is a modest and calm regularity to the sound, as though they had decided to walk a little way together. Soon, though, the peace is troubled by a command from the piano. This is followed by a kind of heavy march on the organ, introducing a musical phrase that is to provide the motif for numerous developments and variations. Some of these are rhetorical, some of them dramatic, as the organ and the piano take turns at displaying features that may be menacing, seductive, tender or furious.

The culminating moment in this drama is when immense chords are head from the organ over a furious declamation from the piano, with all the brillance of these two instruments combined in a fortissimo.The conclusion takes the form of that same timid and languorous sigh, in the course of which the two protagonists unfurl their lyrical and tender replies.