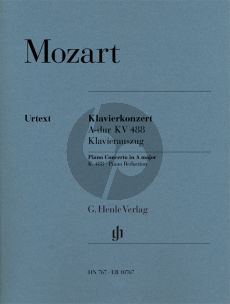 This piano concerto by Mozart presented here inaugurate an ambitious project at Henle Publishers: in the coming years many of the Salzburg master’s 23 piano concertos will be published in completely new Urtext editions. And none other than András Schiff is collaborating with us. His piano reductions are aimed at amateurs rather than professionals; his fingerings for Mozart’s solo part have been exquisitely fine-tuned and are inspiring; and where Mozart’s original cadenzas are missing, Schiff’s stylistically perfected ones have been included. In so doing we aspire to set a new precedent. The quality is not only guaranteed by András Schiff, but also by the Mozart scholars to whom Henle Publishers have entrusted their Urtext editions. Each work is edited by a specialist, according to predetermined editorial guidelines.

First and foremost Mozart’s handwritten scores have been consulted, being the most important sources. In some cases these had not yet been available when preparing previous editions. Moreover, we know today that in addition to Mozart’s own manuscripts, early copies in parts and prints also contain important information regarding the musical text.

A co-production with Breitkopf & Härtel, Mozart’s piano concertos are not only available as attractive and affordable piano reductions, there are also an accompanying Urtext conductor’s score, orchestral parts and a study score. This will ensure that this lavish new edition can be used in many different contexts: whether studying the solo part in a definitive Urtext edition, which reflects the latest research findings; or playing together with a second pianist, providing a piano reduction which not only sounds superb but is also easy to play; or studying and reading the pocket score and finally performing with an orchestra, using newly-prepared material.