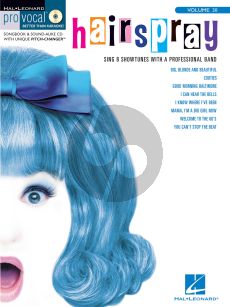 Sing along to eight songs with a professional band, the pro vocal series is ideal for those preparing for an audition. The CD contains demos for listening and backing tracks to sing along to. The CD is enhanced to allow computers (Mac or PC) to change the pitch of the recordings without changing the tempo. Perfect for parties, song practice and gigs without a backing band. The west end show has won four awards in the Oliver Awards (March 2008) including best musical.