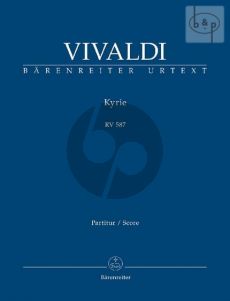 Today the Gloria RV 589 is one of Vivaldi's best-known compositions and one of the most frequently performed sacred vocal works from the Baroque period. Vivaldi wrote the Gloria as a self-contained work in the style of a concertante mass. However, it was probably also performed within church services. The scoring of the solo voices (SSA) suggests that the work was written during his period at the Ospedale della Pietà, around 1716. In the twelve movements of the Gloria, Vivaldi displays the whole range of his mastery from festive, sublime outer movements to tender, transparently scored solo passages. The same mastery has also been applied to the Kyrie RV 587, scored for two choirs and two groups of stringed instruments. The date of its composition remains unclear. It is a purely a choral work without solo passages. Both works can be performed independently but can also be combined as a kind of short mass. Although the authenticity of the autograph manuscript score is beyond doubt, these new editions contain some re-evaluations in phrasing and performance practice which go beyond what other editions have to offer. The piano reductions are straightforward, clearly presented and preserve the character of the works. Attractive choral pieces which can be combined to form a short mass - Informative foreword (Ger/Eng)