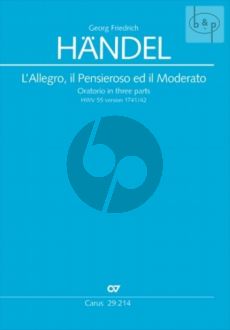 The two John Milton poems, L'Allegro (cheerfulness), and Il Pensi eroso (melancholy), describe the differences between these two moods. Charles Jennens fashioned a libretto from these texts, adding a third part entitled Moderato (moderation). From the first performance the oratorio was already a great success, a success which continued in later years. Vocal Score version 1741-1742.