Mass B flat (adapted from the Liturgy of St.John Chrysostom) - Sergei Rachmaninoff 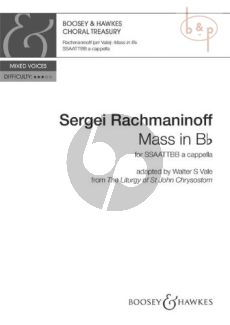 Earn 250 Poppels with this product

The 'Mass in Bb' was first performed in November 1915 by the choir of All Saints, Margaret Street, London. The Director of Music at the time, Dr Walter Vale, adapted movements from Rachmaninoff's 'Liturgy of St John Chrysostom' to the words of the Ordinary of the Mass from the 'Book of Common Prayer', in English with the exception of the 'Kyrie' which uses the traditional Greek words. The adaptation was sanctioned by Rachmaninoff, who attended a performance of the 'Mass' at All Saints in 1924.