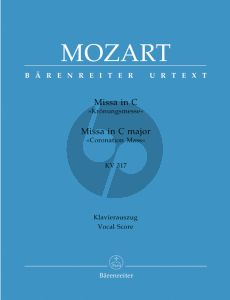 In January 1779 Mozart started his new position as court organist in Salzburg which entailed the composition of numerous sacred works. The autograph of his “Missa in C major” K. 317 – known as the “Coronation Mass” since the 19th century – was dated “li 23 marzo 1779”. This was noted in the composer’s hand at the beginning of the “Kyrie”. Possible dates of the premiere can be deduced from the dates of the Easter holidays in 1779 so it would have been either on 4 or 5 April.

Mozart probably wanted to showcase his musical skills with the composition of the mass, the scale and instrumentation of which is very grandiose and not at all modest.

The nickname “Coronation Mass” refers to various coronation ceremonies after Mozart’s death during which the work was performed. However, the legend that the mass was composed for the occasion of a remembrance celebration for the crowning of the image of the Virgin at Maria Plain outside of Salzburg is still being told today.