Book with CD and MP3 / edited by Peter Anton Ling 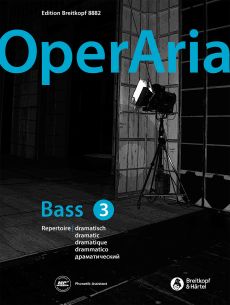 The OperAria repertoire anthology was much applauded when it came on stage with three baritone volumes in 2015. The successful baritone debut was followed in 2017/18 by the appearance of the four soprano volumes, also conquering hearts in no time. Now, another performance:  The curtain rises on the bass volumes, the foundation of the vocal family for heavier, darker voices, though nevertheless brilliant and full of radiance. The protagonists have such well-known names as Bartolo, Don Basilio, Colline, Don Pasquale, Falstaff, Figaro, Kecal, Osmin, Sarastro. Other heroes less often in the limelight, such as Dulcamara, Sancho Pansa, Phanuel, and Sir Morosus, can certainly also count on much applause.

"It is my aim to give students a modern, systematically structured, well-informed vocal coach that meets the demands of present-day stage practice. And, of course, a cohesive repertoire and logical presentation of audition arias for every vocal genre."
(Peter Anton Ling)

OperAria is the ideal “vocal coach” for all voice types. Edited by Peter Anton Ling, the books address all singers and are conceived above all for training and auditions. In addition, through their careful selection, they offer valuable inspiration for opera recitals.

OperAria – repertoire anthology of opera arias according to vocal criteria (range, tessitura, specifics, type of aria) with due regard to practical aspects of musical and theatrical nature (style, era, role type, national provenance)

with comments on the arias