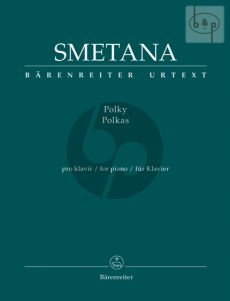 The polka is to Bedoich Smetana (1824û1884) a compositional form similar to the polonaise and mazurka to Chopin, or the waltz to the Strauss family. The artistic stylisation of the polka engaged the composer from his earliest attempts at composition, and he returned to it in his mature works. The works in this new Urtext edition û Three Salon Polkas op. 7, Three Poetic Polkas op. 8, Reminiscences of Bohemia in the Form of Polkas op. 12 and 13 and polkas from the 1850s û together with the series of Czech dances, form a high point of Smetana's compositions in this genre. The edition is based on a Critical Edition of the piano works of Bedoich Smetana which has been revised by the pianist and Smetana interpreter Jan Novotny. Novotny's editorial commentary forms part of the edition.