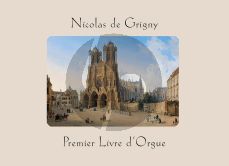 Earn 2,300 Poppels with this product

Alongside the organ music of François Couperin and Louis-Nicolas Clérambault, Nicolas de Grigny’s only publication marks the apogee of Grand siècle organ music. The 1699 book contains a complete organ mass and alternatim settings of the five principal hymns for use at the more important feasts of the church year. How it was received at the time is unknown, yet the publication was considered of sufficient value to have been independently copied by JS Bach and JG Walter and was also reprinted in 1711 by the Paris publisher, Christophe Ballard.