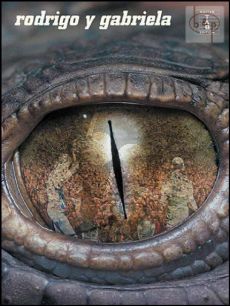 Rodrigo Y Gabriela have been one of the most unusual success stories of the last two years. An acoustic guitar duo, originally from Mexico City, Rodrigo Sanchez and Gabriela Quintero began playing in metal bands as teenagers before switching to acoustic music and traveling to Europe, where they built up an audience by busking their fiery fusion of Latin, jazz and rock music. Renowned for their virtuoso techniques, which incorporate a dazzling array of percussive sounds and lightning-fast fretwork, they have become a sensation at festivals across the world, peaked by a headline appearance at Glastonbury 2007. This guitar TAB book is the matching folio to their most recent album, which was produced by John Leckie (Radiohead, Muse, Stone Roses), and features their original compositions such as Tamacun and Diablo Rojo (which is to feature on the forthcoming Gran Turismo 2008 videogame) alongside their stunning arrangements of Metallica's Orion and Led Zeppelin's Stairway To Heaven.