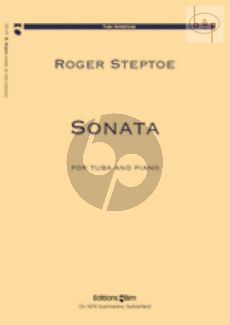 In one single movement, but in two distinct parts played without a break, this Sonata exploits both the lyrical and dramatic qualities of the tuba. The music is dance-like and balletic. It is a choreographed dialogue between the two instruments. The entire work is built from the opening five notes of the tuba part which controls the melodic lines in both the tuba and piano music. The piano part is largely harmonic and rhythmic although the solo passages in the faster, second section, reveal a distinct melodic character again created from the tuba's opening motif. This work, which is dedicated to the distinguished Scottish tubist, James Gourlay, and his wife, the Brazilian dancer, Léa Havas, is prefaced with a quotation from Shakespeare's "Venus and Adonis": "Dance on the sands, and yet no footing seen! Love is a spirit all compact of fire, Not gross to sink, but light, and will inspire." Roger Steptoe, December 2009.