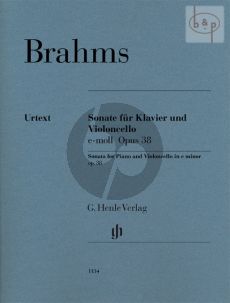 The e minor Cello Sonata is the first work for one solo instrument and piano which the meticulous composer also had printed. In summer 1865 Brahms offered it to the publisher Simrock as a sonata 'whose two instruments are both absolutely easy to play' - and rightly so: contrary to the later F-major Sonata op. 99, this early sonata is technically less demanding, yet musically more striking at the same time, so that it is a hit with amateurs and professionals alike. This new edition is based on the new Brahms Complete Edition and thus boasts, besides in-depth comments, a musical text revised according to the latest scholarly findings; as always, the cello part is enhanced with additional markings. Fingering of the piano part by Klaus Schilde. With supplementary violoncello part marked by Claus Kannngiesser.