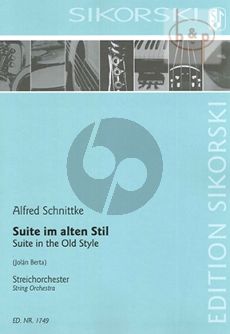 Alfred Schnittke's 'Suite in the Old Style' was composed in 1972 and received its premiere in its original form in March 1973 by Mark Lubotsky (violin) and Lyubov Yedlina (piano) in Moscow. The five-movement work - an homage to the suite form of the 18th century - is one of Schnittke's most frequently performed works and has already been adapted a number of times. In this adaptation by Jolán Berta, heard and authorised by Schnittke during his lifetime, Sikorski offers the popular Suite by Schnittke for a purely string ensemble for the first time.