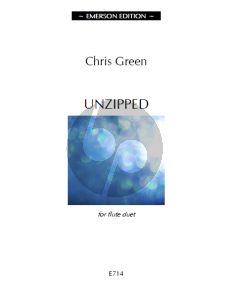 Unzipped began life as a piece for solo flute but when my daughter heard it, she loved it and insisted it should be a duet so she could join in. Now I can’t imagine it any other way – double the fun! The first flute part is significantly harder than the second and requires a number of extended techniques. The only extended technique required in the second flute part is the ability to sing whilst playing. Unzipped is best performed with abandonment, so unzip any shyness you might have and unleash the extrovert within! Have fun! Duration: 3.05 min. Grade 5-6 Chris Green was born in Cleveland, UK, in 1971. She began to play the piano when she was eight years old, and later studied music at Bretton Hall (affiliated with Leeds University). In 2006, aged 35, while working as a piano teacher, Chris had the chance to try the flute (it’s never too late). She fell in love with the instrument and, in 2007, decided to take lessons with Margaret Humphreys. As a regular participant at the Flute Kitchen in Harrogate, Chris had the privilege of meeting Greg Pattillo. It was his astonishing beat-box style of playing the flute which inspired her and ultimately led to the writing of Unzipped. Chris has also written Zinging (E704) for solo flute, in a similar style and using the same techniques.